Recently I was talking with a friend who is experiencing problems in a relationship around effective communication, or more specifically, the lack thereof. I sat down and wrote down some resources that came to mind.

Because so much of our communications challenges are centered around fear, I'll include my tried and true fear reference as well, which serves well for any personal challenges where fear is a major factor.

Feel the Fear and Do It Anyway - Susan Jeffers, Ph.D.

Note that many of these authors offer workbooks for and audio recordings of their books and/or workshops that function as highly useful companion tools for implementing lessons learned. Also, the skills learned are valuable not just in making polyamorous relationships work but for all the important relationships in our lives.

What other communication skills resources do you recommend? A comment here or an e-mail to anita.wagner@practicalpolyamory.com would be most welcome.

The fabulous erotica author and editor Susie Bright has posted the video below on her website, Susie Bright's Journal. She's doing an erotica reading that is a discussion between two people in a poly relationship. (It is visually SFW, but the audio isn't.)

She has also posted a free episode of her podcast, In Bed with Susie Bright, of her interview with Tristan Taormino about Tristan's book Opening Up (which I review here.) You can hear that here. Enjoy!

The Importance of Trust 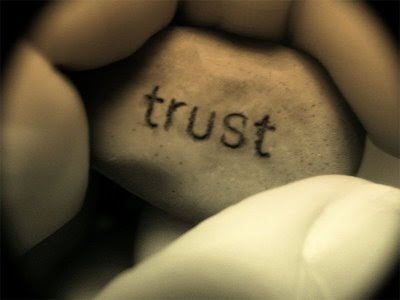 Anyone who has ever attended one of my polyamory relationships skills programs knows how much I emphasize the importance of maintaining trust in poly relationships, though in truth, it is a key ingredient in the success of pretty much any relationship. It's just especially important and sometimes a bit more tricky for polyamorous people until they get the hang of it.

A workshop attendee recently pointed out the old adage that three things are necessary to keep a marriage happy: trust, respect, and friendship. I basically agree, though I think love is a pretty important ingredient, too.

Today I came across this excellent article by Michael S. Wade on the US News website called "Ten Ways You'll Erode Trust." It's written for the workplace, but most of it applies equally well to intimate relationships, even moreso to polyamorous ones. Check it out!
Posted by Anita Wagner Illig at 6:28 PM 2 comments:

Terisa Greenan's "Family" web series is all the rage around the polyamory community. I've already blogged about it and one of the actors' job discrimination problem here. Terisa not only writes and produces the series about a MMF triad living in Seattle, she lives in such a triad as well.

If you haven't seen this series, do check it out on YouTube - and if you want the uncensored version (and I DO mean uncensored, NSFW, shoo the kiddies away, etc.), check that out here with my personal recommendation of Episode 7 - hot! And kudos to actors Amber Rack and Eric Smiley for being willing to do what they did to make it that way.

The Seattle Times reports today on "Family" both via a news article as well as via the video below.

In the video Terisa references the second episode which centers around the triad attending a Seattle Poly Community potluck and discussion. If you've ever been to a local poly gathering, pretty much no matter where you live, you will recognize some of the attendees as eerily familiar. These folks really nail it. So enjoy! And congratulations to Terisa and company on their increasing notariety.

This little gem just out - it looks to be a classic opportunity to be tarred and feathered for being so ill-advised as to give polyamory a try. This thing is in nobody's best interests, except perhaps for Fox's investors. Not worth a meager $500 - promise.

Are you involved in a polyamorous relationship that you are no longer happy with? Do you want to divorce because your spouse wants to bring another person into the marriage? If you are please respond below. I am a Producer for a daytime TV show in Hollywood, CA. We are currently looking for couples who are unhappy with the life style they have chosen and want to end their relationship. If you or anyone you know is a great talker with a lot of energy, we want you to come on our show! After the show we sit you down for mediation so we can help guide you in the right direction for your next step. We provide: *Round trip tickets to Hollywood, CA *Transportation from airport to hotel *Transportation to Studio *Back to airport after taping *$70 each per diem for food *$500 appearance fee which will be received Saturday after taping ALL YOU HAVE TO DO IS SHOW UP! SO HOW READY ARE YOU TO YOU’RE YOUR SPOSE HOW YOU FEEL AND WHAT YOU THINK ABOUT THEM. If you or someone you might know may be interested please apply now!

Posted by Anita Wagner Illig at 1:04 AM 2 comments: