This Week on Savage Love: Dan Rejects Polyamorous as Identity 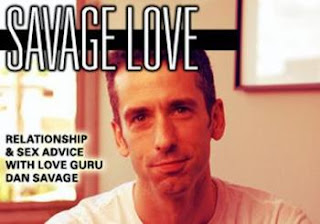 I have to admit I'm disappointed in Dan Savage today after reading his response to Polyamorous Polymath ("PP") in his latest column.

Dan does not identify as polyamorous (he and hubby being "monogamish").  Instead of addressing PP's concerns, Dan quickly steps all over PP's idea that polyamory is his identity and not just a lifestyle.  Dan tells PP that polyamory is about what people do and not who they are.  In fact, he's vehement about that, and about polyamory not being a sexual orientation, which seems to be his supporting argument against polyamory as sexual identity.  (Protect your turf much, Dan?)

PP is a man who finds himself in a difficult poly/mono relationship trying to figure out how to give up polyamory in order to meet the ultimatum of his monogamous girlfriend.  PP loves her and doesn't want to have to give her up.  PP's dilemma is that he clearly believes that polyamory is a big piece of his identity, and agreeing to foresake all others feels like giving up who he is.

PP has a tough choice to make.  Dan tries to make it sound like it's an easy one, a lifestyle choice, but he's wrong.  Many therapists would agree that giving up who we are to make someone happy is not a very healthy relationship strategy.  At some point it sounds a lot like codependence.

Over the last 15 years I've met many, many polyamorous people for whom being polyamorous is to them about a lot more than what (or whom!) they do. They say emphatically that it's about who they are.  Many tried to live by mainstream society's monogamy rules because they thought they had to, but it chafed - a lot.  Many always felt like they were different and like they were the only ones who saw relationships differently.  We still have people come into our community who are delighted and relieved to have discovered they weren't alone after all.

I expect that this point will be made much more frequently in the future as research under way now gives us more scientific insight into such questions. In the meantime, I hope Dan catches up soon because his advice basically says to PP that his identity isn't valid.  I have to wonder how Dan would feel if someone told him his identity isn't valid.
Posted by Anita Wagner Illig at 5:07 PM

While living polyamorously may be a lifestyle choice to some (though remember the same used to be said for bi or homosexuality) for me it's an intrinsic part of who I am.

As far back as I can remember, I never understood jealousy, couldn't figure out why I was supposed to stop loving one person before starting to love another, didn't really care what my partner was doing with whom as long as my needs were being met in our relationship and always believed that real love is unconditional. The expectation of being the exclusive love for another person in order to love them in return is a condition.

Can I live monogamously? Yes I could, just as I could live entirely hetero or homo sexually.
Could Dan Savage live without expressing his true sexual orientation? Sure he could, after all for hundreds of years people have done just that.

Would that make either of us feel we were living fulfilled, honest lives?

So why is it that something that impacts my sense of self as much as Dan's sexual orientation impacts his sense of self not considered a valid identity but a behavior choice?

I have a lot of respect for Dan Savage and disappoints me greatly that he can't seem to see what polyamory is. It's not a sexual orientation at all. Perhaps "heart orientation" or "soul orientation" would be a more accurate term. That said, I am not polyamorous but my partner of 25+ years most definitely is. As close and powerful as our relationship is, I know that she would be greatly diminished in her full, human capacity if we adhered to strict monogamy in our marriage. Knowing her as I do, it would not be fair to insist that she 'cleave unto me only'. In point of fact, the connections she's made to other partners has greatly enriched our relationship.

Over the many years that we've had an open relationship, we have also witnessed the rise and occasional fall of several other poly-based relationships. In love, we all have our own approach, our own strengths and weaknesses, and these tend to be amplified when we stray into the socially uncharted waters of polyamory. The pattern of "I really love this person but s/he's monogamous and I'm polyamorous" is one I've seen over and over. It tends not to work out well—unless. Unless the monogamous partner can come to the full realization that as strong as his or her love may be, they have no right to cage their partner within an exclusive relationship unless it is their partner's will. It may take a while to become secure enough to open the door to another in your partner's life, but if you know that they are polyamorous and fully accept the implications of this orientation, you will lose them and deny yourself an incredible and transformative experience if you do otherwise.

Blessings on your path,

Karen and Mark, thank you both for sharing your valuable thoughts and experiences here. Mark, I am totally impressed with your wonderful point of view as the monogamous partner of a polyamorous woman. I agree that love isn't about caging someone. I also know that our honeys tend to love us even more for their freedom, for being loved and valued without being possessed, blamed, etc. You are a remarkable man to be able to take such an approach. I expect you may have encountered others' judgmentalness who do not understand your point of view at all. As difficult as poly/mono relationships can be, and as often as they fail, I know a few mono partners like you who really get it, and I feel grateful that there are those who have the emotional capacity to let the one they love be who they truly are. Blessings on your path as well!

Your position and Dan's are not as far apart as you think. Life is full of tough sacrifices and tradeoffs. Addressing PP's question in terms of identity would be a mistake, because people don't fall in love with relationship styles, they fall in love with people.

I'm not going to get my feelings hurt by Dan's answer, because it's not a statement about me, or about you. It was the answer PP needed. No one can answer PP's question for him about what's right for him. Dan realized that. All we can tell PP is that he has to give up something intrinsic to him-- the abstract concept of "polyamory" or this living, breathing woman. Who are we to tell him which part of his deepest heart is his "identity"?

PP has to painfully sacrifice part of himself-- either the abstract concept of "polyamory", or this living, breathing woman. Who are we to tell him which one is his "identity"? Aren't they both? It's like grasping at air.

So Dan doesn't. His answer acknowledges two things: that only PP can decide which tradeoff is best for him, and that the "identity" approach is not useful to that decision.

I suggest that we should not get our feelings hurt and start a pissing match, because it's not about us, and it's the answer PP needs. We all hack off crucial parts of our core identities just to be able to live with other human beings. Then we get used to it. The ones that survive the compromises, we arbitrarily designate as our true selves. Is there really any such thing?

Matt, no doubt that polyamorous people have to make some hard choices sometimes. No quarrel there, and as I said, PP is faced with just that. In no way did I suggest that anyone should tell anyone else how to identify. It was Dan who erroneously took issue with PP's identity. The reason this point is important is that for decades poly people who knew in their hearts they are drawn to love more than one person at a time have been giving up that option to attempt to remain in the monogamous relationship that was expected of them. Some are able to be happy doing that, but a very many number end up feeling trapped because, yes, they gave up a big part of who they are. Dan's statement, "Poly isn't something you are, it's what you do" dismisses not only PP's identity but the poly identity of all polyamorists who feel that being responsibly nonmonogamous is a deep part of who they are. It's disrespectful, like dismissing homosexuality's legitimacy by saying it is a choice.

So, it has come to this. Identity politics, squabbling with our best allies over labels that make us feel defensive over our sense of self-worth. It's sad.

It may not be a "sexual orientation", but it *is* a sexual identity. Cross-dressing, drag queens, various forms of trans and intersexed are not orientations - they are identities - but they are acknowledged, supported, and protected by the LBGT community and human rights activists. Cross-dressing is something you do or wear, not who you are attracted to. The varieties of trans doesn't indicate which genders you are attracted to, yet it is included all the same.

Dan would probably suggest to a straight cross dresser to 'fess up to a potential long term partner pretty early on about his requirements. If she balked or refused, he could either marry her anyway and suppress his needs, do it elsewhere in secret, or not bother with her at all.

Dan isn't against poly, but as a sexual identity, the same advice applies. Potential partners should be asked to deal with it. If they can't, they need to be dumped or, if you are really a sadist, practice that identity in secret. But poly is about openness, and secret poly isn't poly, it's cheating. So polys are left in even worse shape than cross-dressers.

Poly is a sexual identity in that there are entire communities formed around it, even those who are non-practicing at the moment. We are persecuted, lose jobs, lose our kids, can go to jail in many places in the world, and yet still we fight to have our rights recognized. It's not a 'habit' or something you do. It is who you are, and is just as valid an identity as any other. And far more normalized in many places.

Should any of you care to check it out, I've put an update post today at http://practicalpolyamory.blogspot.com/2012/11/dan-responds-to-poly-as.html
Dan has responded to what has turned out to be quite a controversy in comments and elsewhere as to his advice to PP. I've also left him a comment on today's "SLOG" blog commentary clarifying my remarks a bit.