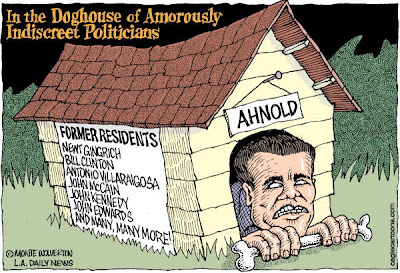 I posted this political cartoon to Facebook today, remarking "Would that the public drew a more realistic conclusion from this than this "trend" being due merely to powerful, wealthy men being immoral. (Not that they aren't, but there's more to the story, say Sex at Dawn authors Christopher Ryan and Cacilda Jetha.)

A poly friend of mine remarked, "I don't see why they have to necessarily split over this.... Just acknowledge it and be open."

Of course that's what he and I would say and for good reason. But betrayal is still betrayal, especially when a long-time commitment has been betrayed in such a spectacular fashion.  Arnold Schwarzenegger's love child's mother reported directly to his wife, Maria, as a member of her personal household staff for 20 years. Having this long-time member of her household *and* her husband both betray her by hiding this huge secret for ten years may just be more than Maria can tolerate, at least right now. A cuckolded spouse almost always imagines that others, i.e. friends and maybe family members, knew about this situation and kept it from them as well.  I've had that feeling myself when I was cuckolded years ago, and it's a very miserable feeling indeed, very hard on one's pride.

Even a lot of poly people are hard pressed to stick around if a partner betrays their trust in such a devastating way - not everyone is willing to deal with doing the long-term work it takes to restore trust and emotional order to the relationship. For some the betrayal destroys the love, which they don't want to recapture, at least not any time soon, all things considered. And Maria has the additional burden of public humiliation on a massive scale to cope with, plus four children she wants to protect from shame, pain and chaos. I think we have to give the lady some time, though surely she's being told by a lot of people that he's an irredeemable untrustworthy bastard. He may very well be so, but she needs to decide that for herself.

I feel compassion for the entire family and wish them love and peace of mind and heart.  Enlightenment as to other ways of arranging relationships that facilitate healing and unity is probably a bit too much to hope for in the short term for Schwarzenegger and Shriver, but one never knows as to the long term, especially when it comes to Hollywood marriages.  Still, betrayal isn't an especially healthy place from which to create a more functional framework.
Posted by Anita Wagner Illig at 12:11 PM 2 comments: