Tomorrow is Sexual Freedom Day, established as such by the Woodhull Sexual Freedom Alliance, September 23 being its namesake Victoria Woodhull's birthday. I thought I'd take a minute and let you know that I will be attending and participating in tomorrow's activities as a recognized member of the polyamory leadership community. I did this last year as well. Woodhull is based here in DC and does excellent work on behalf of all of us. In case you aren't familiar with them, their mission is, in part: "... to affirm sexual freedom as a fundamental human right, working towards a world that fulfills the words of the United States Supreme Court that
“…our laws and tradition afford constitutional protection to personal decisions relating to marriage, procreation, contraception, family relationships, child rearing, and education. In explaining the respect the Constitution demands for the autonomy of the person in making these choices, we (the court) stated as follows:
‘These matters, involving the most intimate and personal choices a person may make in a lifetime, choices central to personal dignity and autonomy, are central to the liberty protected by the Fourteenth Amendment. At the heart of liberty is the right to define one’s own concept of existence, of meaning, of the universe, and of the mystery of human life. Beliefs about these matters could not define the attributes of personhood were they formed under compulsion of the State.” Planned Parenthood of Southeastern Pa. v. Casey, 505 U. S. 833 (1992) quoted in Lawrence v. Texas, 539 U.S. 558 (2003)"

Pretty awesome, huh? Woodhull Executive Director Ricci Levy (right) is a member of the Polyamory Leadership Network and very well connected to the polyamory community. As such, all of we polyamorists have a connection with Woodhull, so it seems doubly appropriate to call your attention to tomorrow's festivities. 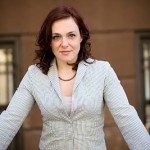 Another poly leader also participating in tomorrow's Sexual Freedom Day activities is New York City poly community organizer and attorney Diana Adams, Esq., (left) who will be one of six panelists to speak tomorrow afternoon to the topic "Sexual Outlaws: The Prohibition of Pleasure." Tomorrow evening I am attending a VIP reception hosted by Woodhull board members sex educator Nina Hartley (yes, THAT Nina Hartley, below left) and author Carol Queen (below right) of San Francisco's Center for Sex and Culture. After that there will be dinner and the presenting of the "Vicki" Sexual Freedom Awards to three deserving individuals whose work has substantially furthered the cause of sexual freedom. It promises to be a great day. 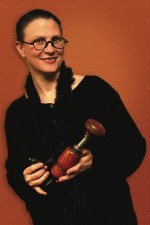 In 2010 Woodhull published the 163 page report, "State of Sexual Freedom in the United States" to which Deborah Anapol contributed and which is definitely worth the read. You can download the pdf of it for a (small if necessary) donation here .
Lest anyone wonder whether there will actually be any examples of sexual freedom associated with this event, a local friend is having a play party this weekend at which Nina Hartley will be a special guest, and all the proceeds go to support Woodhull. Nina is a friend and an awesome sex educator these days, and it will be fun to see her in, um, action, doing something that she does best - raising awareness of the importance of the mission of the Woodhull Sexual Freedom Alliance.

I know times are tough and budgets are tight for a lot of people, but every donation, even a small one that you wish could be larger, will be greatly appreciated and put to good use on behalf of sexual freedom for everyone. Please think about supporting The Woodhull Sexual Freedom Alliance with whatever treasure you have to share. You can do this here.
Posted by Anita Wagner Illig at 1:55 PM No comments:

So it's back to school time, and I'm here to answer that time-honored question asked of students returning from summer break - what did you do on your summer vacation?  Somehow I doubt anyone answered quite like this.  Well, except for the kids who were at Polycamp NW, and there were a lot of those.


Last October at the Poly Living conference I met Quintus, the organizer of Polycamp NW, a family-friendly camp event held at the Environmental Learning Center (ELC) in Millersylvania State Park near Olympia, WA.  The ELC is a wonderful private area nested under old growth cedar and fir trees near Deep Lake - breathtakingly beautiful!  Quintus invited me to present poly programs, I agreed, and I'm so glad I did. 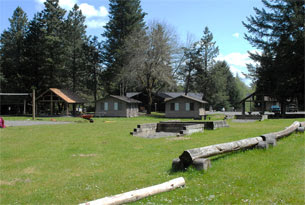 Seattle is one of my most favorite places with it's rocking poly/alternative community, it's natural beauty, and its rep as US studioglass mecca.  Usually looking at art glass is a must do activity for me when I visit Seattle, but this time I didn't buy any glass but instead spent my time with the wonderfully warm and loving local poly community, as well as many who came from Western Canada, Portland, Oregon, and other parts of the region.  The sun shone brightly and the weather was spectacular during my entire visit. 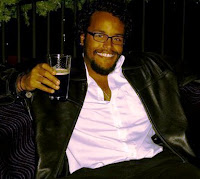 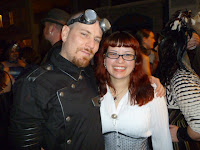 Quintus's charming and handsome house mate Lydia (pronounced "li-DAY-uh", above right) picked me up at SEATAC, and we took the ferry across the sound to west Seattle.  There we found Quintus, his beautiful wife, Francisca, (above left) and his extended poly family in the final throes of preparing food and loading a van and two trucks with supplies and a huge abundance of fresh foods to feed the 195 people who would be in attendance.  And feed us they did.  His friend Doug did an awesome job as chef, he and the volunteers cooked up delicious, nutritious meals all weekend long.

The weather was perfect and the drive south to Olympia spectacular!   I had a hard time focusing on my community organizing conversation with Quintus with a sweeping expanse of water on our right and Mount Ranier in all it's magesty floating on the horizon to our left.
Anyway, we arrived early Friday afternoon and immediately started unloading and helping set up the large and well-equipped lodge kitchen. 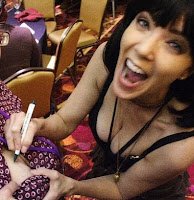 The program for the weekend was quite eclectic, partly on poly topics and partly on fun classes for families with kids.  It was so good to see so many families there and to know that the older kids had a place to be where their family was more similar to those of the other kids than is often so in the mainstream world.  The ever beautiful Cunning Minx gave a workshop on poly dating, and then she interviewed me for her latest Poly Weekly Podcast on advice for poly newbies.  I gave two workshops, one I call Emotional Edge Play:  Polyamory for BDSM/Leather/Fetish Folks, and a second on Poly/Mono relationships that got huge attendance.
There was an adult cabin section that was set well apart from the cabins and camping area for families with kids, and that gave those interested in adult activities a place in which to pursue them.  There was a class on rope bondage and a good discussion on the latest in safer sex practices.  There were also activities at night for everone, including a talent show and a blues dance at which someone taught the adults how to do a very sexy, sultery dance to blues music.  Very hot stuff. 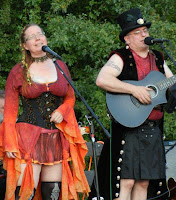 It was SO lovely to reconnect with friends I hadn't seen in a while, like Minx, the Erosong family, Teresa Greenan, and Sue Tinney and Christopher Bingham of The Bone Poets Orchestra (formerly Gaia Consort).  Sue and I shared a ride back to Seattle, and I admit to developing a bit of a girl crush on her as we got to know each other better.
I had such a great time at Polycamp NW.  Quintus and his dedicated team created a very happy space for 195 poly people and their kids to get together and revel in what it is that we all have in common.  It was worth the money and travel time, and this definitely won't be my last time at Polycamp NW.  Join me there next year, won't you?

Posted by Anita Wagner Illig at 4:55 PM No comments: