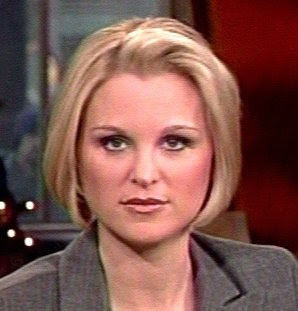 It's unfortunate that Blogger for some reason failed to send me for publishing a strongly-worded comment from Mornings with Mike and Juliet show host Juliet Huddy when she sent it to me on September 26. She is definitely not happy with me and my assessment of the outcome of the September 25 segment of the show on open marriage that featured author Jenny Block.

In Ms. Huddy's comment, which I posted today as soon as I received it, she certainly gave me the full force of her opinion, to wit:

As the host of the show you just maligned, I'd like to respond to your accusations. Suggesting my colleagues are inserting their political leanings into the content of our show is not only offensive, it's wrong. Suggesting they lack integrity is also offensive, and WRONG.

The 'missing segment' you're referring to was a mistake made by a young webmaster, it's as simple as that. There was no strategy to eliminate your "side"; there was no conspiracy. It was an oversight and it was corrected immediately.

Our producers came up with this topic because they felt it was worthy of discussion. They worked hours trying to find a fair balance, and they achieved that goal. Mike and I both agree it's a fantastic, interesting, worthy subject to discuss.

The only one who lacks integrity...

Well, let's just say it's easy to buy into stereotypes ("Of course, this is Fox we're talking about here"). It's also real simple pick up a phone and get the facts. Your sneering comments about Fox and our fantastic, fair producers are inane. Fox gave you an outlet to air your side, which Jenny did quite eloquently. Do your homework and quit insulting my colleagues.

I went back and read my original post, and though I can see why it may not please her, I'm having a hard time seeing myself through her eyes. Yes, I made a couple of assumptions that turn out to be incorrect, but as you will see below, I believe they were reasonable ones based on the facts at hand in the moment. So, by and large, after mulling it all over I really must stand by what I said. Here is my response to Ms. Huddy:

Ms. Huddy, I can understand your anger and your desire to defend your producers. Perhaps in your pique you did not notice that the same day the open marriage segment aired I added an amendment to the very top of the post that says that when asked to make the entire segment available instead of only the anti-open marriage portion of it, your producers agreed to do so. There was no reason for me to believe that the duties as to what goes up on your website would be left in the hands of someone who was not up to the task. Impressions count for a lot, and for whatever reason, the failure to include both sides of the story gave a very poor one.

Also, unfortunately for you and your show, Fox has a well-established reputation for leaning to the right. My perception is founded in reality and not on stereotype. There is plenty of data to illustrate that Fox has a vested interest in not offending the conservative base that represents the majority of its viewers. When one then factors in that anything other than life-long, heterosexual, one man/one woman marriage is considered contemptible by social conservatives, there is absolutely no reason for me to believe that your show is somehow exempt. You may not like being judged by the company you keep, but it is a fact of life. That said, based on the information you have provided I am willing to accept that it is possible that not all Fox programming is the same. I’m happy for the update and your defense of your producers, but in truth what is unknown here is to what extent your programming is controlled by Fox executives.

Fox’s intentions would have been a lot more clear had Dr. Kirschner not been given the last word. Many psychologists think they know all there is to know about open relationships and are only too happy to speak on the subject for pay, lack of knowledge notwithstanding. In fact, there exists amongst untrained therapists an inexperience-based bias against open relationships because all they see are people for whom it isn't working. People for whom it is working don’t seek them out, so their "knowledge" is based on a flawed and incomplete perspective. It is entirely untrue that failure is inevitable in open relationships. I know many, many couples for whom it works and works well, and as they learn and implement the relationship skills required, there are more of those all the time. Your show ended by giving quite a different impression without asking Jenny Block or any other person for their response. As such, I stand by my criticism of that aspect of the show.

I appreciate that there was interest in the subject, and should that interest continue, I'd be happy to assist your producers to be sure that any future treatment of it achieves their goal of being genuinely fair and complete.