After posting very candidly to their very popular personal development website early this year about their decision to open their marriage, I'm sorry to say that author and personal development guru Steve Pavlina and his wife, Erin, have decided to divorce.  Steve cites polyamory as part of the reason in his recent blog post entitled Separation.

Steve says that the communication demands were too much for them to handle.  Yes, there is a big investment of time and energy up front when a married couple transitions to an open marriage.  I imagine both are very busy people from what I see of their work, and they are raising two young children, so maybe they underestimated how much time and emotional energy would be required to accomplish what they intended. It's easy to do.

But that's not all of it. Steve writes that the poly path and the emotional intimacy and self-examination required along the way revealed truths that pointed them toward separating as the best course.   So it sounds like polyamory didn't kill the marriage, it just revealed flaws and truths that now point them in different directions.

This is one of those situations that makes a good example of why I say that polyamory isn't for sissies.  Not that the Pavlinas are sissies, certainly not.  I mean that it's not for the faint of heart because growth does indeed happen, and sometimes with it, change that is unpredictable.  Still, theirs is a good example of how polyamory can serve to further us on our paths to living an authentic life, even when that involves the pain of ending relationships in order to establish new relationships more suitable to who we are.

In any case, I wish Steve and Erin well as they continue to pursue their own paths to fulfillment and happiness.
Posted by Anita Wagner Illig at 2:12 PM 6 comments: 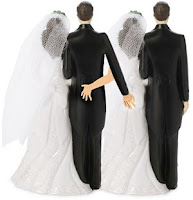 I was dismayed but not surprised to have learned just yesterday,  via an alert subscriber to a poly email list focused on poly southerners, about the following story reported there.  It well illustrates that Don't Ask Don't Tell is not the only discriminatory military law that needs to be put out of our misery.

Apparently a long-term M/F/M/F poly quad with several children was doing what I've believed for a long time could be an entirely sensible solution to the burden of extended isolation and loneliness partners of deployed servicemen and servicewomen regularly have to endure. Both men were in the Army stationed at Ft. Campbell, KY, which straddles the Tennessee/Kentucky state line.

Tragically, one of the men has been killed in combat. As if this grieving family hadn't already been through enough, in the process of assigning survivor benefits the Army learned about the quad arrangement, decided to deny benefits to the widow and insisted on paternity testing to find out which man fathered the children - AND, the surviving husband in the quad faced a dishonorable discharge and loss of his career.

In the civilian world, it is my understanding that legally the father of a child is whomever is legally married to the woman who gave birth to the child. Of course, the Army operates under a different code, specifically the Uniform Code of Military (In)Justice ("UCMJ"), and it was unwilling to pay benefits to a soldier's legal child if he was not the biological father of the child.  It was reported that the widow admitted that the quad was never really sure which man is the biological father of which children because they never worried about such things.

It was also said that the Judge Advocate General office declined to get involved in defending this family. However, the good news is that the ACLU was very happy to step in and quite effectively resolved the problem, partly by threatening national media attention. Due to the ACLU's efforts the widow will get her full benefits as will all of the fallen soldier's children. Hooray!  The status of the surviving husband's threatened discharge was not mentioned, but hopefully the ACLU was able to prevent that as well.  .

Of course, this was a difficult story to keep quiet, and the remaining triad continues to experience various kinds of oppression from locals bigots so is planning to move out of the area.

I don't know whether the soldiers in question were enlisted or officers. It's long been my understanding that the UCMJ's morality laws against adultery were much more aggressively enforced as to the behavior of officers than they ever were as to that of enlisted soldiers. Someone I know who knows about such things told me within the last year that the Army is no longer prosecuting adultery, having higher priorities for which to use its resources, yet here this story is. It may be that once the family configuration was disclosed, the Army believed it was compelled to enforce it's laws.

As the practice of polyamory continues to gain popularity, more such situations may well arise. The ACLU has many more resources than does the polyamory community, so we can only hope that it will continue to step up and help out. As for the rest of we polyamorists, it would be a good idea to write the ACLU a check for as much as we can afford and make it clear the reason for the donation.

If you, as I, oppose taxpayer-funded abstinence-only sex education, you'll be disappointed to learn that on last Tuesday night, Senator Orrin Hatch (R-UT) pushed through an amendment in the Senate Finance Committee authorizing $50 million in funding for abstinence-only programs as part of Health Care Reform - despite over 10 years of evidence that these programs do not work.

By a razor-thin vote of 12-11, the Senators on the Finance Committee gave conservative ideology a victory over science and common sense.

Please take a moment to tell your Senators it's time to stop these programs once and for all!

In fact, Advocates for Youth worked with coalition partners around the country, and October was  launched as National Sex Ed Month of Action. Their hope was - and is - to build support in Congress for the REAL Act and comprehensive sex education.

It's been a 10-year fight to end funding for these harmful and ineffective programs. President Obama has called for their elimination. Democrats in the House and Senate have held firm through budget negotiations.

This fight has been long, but - with the end in sight - it is more important than ever that we all make our voices heard.

Ask your Senators to strip the Hatch Amendment from Health Care Reform. It's easy to do, just fill in your info and click send, the letter is already written for you. Don't let 12 Senators undermine sex education in the United States!
Posted by Anita Wagner Illig at 12:55 PM No comments: