Reflections on Impact of July 2009 Newsweek Polyamory Article on Opposition

The July 29, 2009 Newsweek article on polyamory got a lot of attention, including that of many defenders of traditional marriage. As one might imagine, they were none too pleased. It went quite viral and was blogged about and reported on far and wide both by those who are neutral on the subject and by those who are anything but. The article includes this anemic quote from Glenn Stanton, the director of family studies for Focus on the Family:

"This group is really rising up from the underground, emboldened by the success of the gay-marriage movement."


In some instances it has been rather entertaining to witness reactions from staunch defenders of traditional marriage. The Reverend Albert Mohler, President of the Southern Baptist Theological Seminary, said about the article:

"Perhaps the best way to understand this new movement is to understand it as a natural consequence of subverting marriage. We have largely normalized adultery, serialized marriage, separated marriage from reproduction and childbearing, and accepted divorce as a mechanism for liberation. Once this happens, boundary after boundary falls as sexual regulation virtually disappears among those defined as 'consenting adults.'

The ultimate sign of our moral confusion becomes evident when virtually no one appears ready to condemn polyamory as immoral. The only arguments mustered against this new movement focus on matters of practicality. Polyamory is certainly not new, but this new movement is yet another reminder that virtually all the fences are now down when it comes to sex and sexual relationships. What comes next?"


What comes next?  Hopefully freedom from societal condemnation and being fairly treated on the job and by family courts and child services agencies!

The best other spokespeople from the opposition could do to discredit poly families was to refer to studies commissioned by and conducted by advocates for traditional families and marriage (about same sex marriage, not polyamory, the 2004 Heritage Foundation Study) as flimsy proof that what we do is harmful for children.  It's as though their only hope for taking the wind out of our sails is to hope that poly relationships aren't stable enough to offer a stable home environment for children, a sardonic approach if there ever was one.

The article did manage to strike a nerve in commenter Baring-G, when the entire article appeared on the conservative Christian website Virtue Online:

"Please pardon me as I run to the bathroom to throw up! If Polyamory is where our Western Society is heading (and logic dictates that it is),then our society is collapsing. LORD HAVE MERCY! Lord, bring us a spiritual restoration before it is too late. 'Righteousness exalteth a nation, but sin is a reproach to any people." Let us pray that the people of the West repent and turn back to God.'"


What we who have embraced our polyness see as entirely reasonable and healthy can indeed look like the sky is falling to others. The truth can hurt when these folks realize that their perspective on the issue doesn't match reality. In this case the truth is that the opposition is pretty much impotent when it comes to denying us our right to live a life of romantic sexual relationship freedom. May it ever be so.  As the oft-seen bumper sticker says:

Newsweek Names "Family" Poly Video One of Its 2009 Top Ten

What great news!! Terisa Greenan, creator of the Family webseries, and the video about her and her real-life poly family that accompanied Newsweek online's July 29, 2009 polyamory article has been named an editor's choice of the top 10 NEWSWEEK videos in 2009!  To them I send a big "HUZZAH!" along with many thanks for taking risks (privacy, livelihood, child custody) that most would quite justifiably refrain from taking.  It takes great courage to invite the media into your life and family when you're a poly person.  It can have unintended consequences, but this family handled themselves admirably, and the article turned out very well indeed.

So what does this recognition say about the growth of interest in polyamory in 2009? Quite a lot, actually. The Newsweek article is probably the most widely-read mainstream article ever written on the subject. It was referenced far and wide over the internet by mainstream journalists and religious conservatives (who were none too pleased, of course), and it sparked no fewer than 727 comments on the article on the Newsweek website.  It has certainly helped raise awareness of polyamory, in great part due to the positive example set by Terisa, Larry, Scott, Matt, and Vera.  We owe them our thanks.

If you've never seen the "Family" web series, you can see it in its uncensored entirety here.  After concluding its first season on October 31 it's on haitus just now but is to return in 2010.  Stay tuned.
Posted by Anita Wagner Illig at 3:41 PM 2 comments: 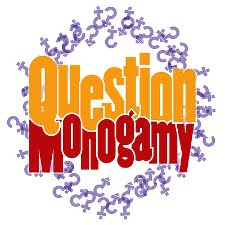 I'm really loving how Tiger Woods's extramarital affairs have inspired a variety of writers to write columns that question monogamy.  (For your very own "Question Monogamy" t-shirt, go here.)    For example, two online articles published today make some especially interesting points.  Huffington Post brings us Jay Michaelson's It's Not Just Tiger: Monogamous Marriage Is An Anomaly , and Newsweek Online just published my girl Jenny Block's The Case Against Monogamy - Why is everyone so surprised about Tiger Woods? When it comes down to it, monogamy doesn't always work.

What I love about all this is that it is drawing attention to the notion that because monogamy is so difficult for many to make work over the long term, everyone needs to wise up to the fact that monogamy should be an intentional choice, not something people do just because they think they're supposed to.

Other polyamory advocates and I have been saying this very thing for a long time.  None of us contends that monogamy is wrong, or bad, or uncool, or especially inferior.  We just want people to know that they have another legitimate option, and that for some polyamory may work better and be more ethical than monogamy.

Whatever way people arrange their intimate lives, committing to monogamy by rote because it's what we are "supposed" to do is clearly a bigger risk than most people realize and can result in tremendous heartbreak for those who find it more difficult to stick with than they anticipated.  It's also a mistake for those who hope they can give it lip service while sneaking around behind their monogamous partner's back, which appears to be Tiger Woods's bankrupt strategy.

Though we polyamorists are often villified for our choices, I am proud to say that I will never cheat on a partner, and neither are any partners likely to cheat on me, because none of us has to.  We make relationship agreements we can stick to, and if we find we no longer can, then we talk with our partners and renegotiate the rules of the relationship.  In this way trust is maintained.  Jenny gets it SO right when she say of her partnerships ....

"We love each other and want to be together, but monogamy is not the cornerstone of our partnership—trust is."


May it some day be so for everyone, no matter what their relationship choice.
Posted by Anita Wagner Illig at 4:04 PM 1 comment:

Tiger Woods's Affairs and the Latest Episode of Celebrity Infidelity 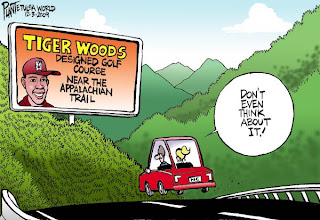 Of course, Tiger Woods's extramarital relationships are THE big news right now.  I came across this cartoon just as I was musing about the similarities with the South Carolina Governor Mark Sanford affair that broke in June of this year.  Though not identical in that Sanford appears to have genuinely fallen in love with his mistress, while Woods seems to have connections that are more sex-based, couples can and do negotiate agreements that permit either or both.  (Another of my posts on the Sanford story can be found here.  This one includes political cartoons.)

And of course, we have no idea what agreement may exist between Tiger and Elin Woods, or how she as a European views infidelity.  They are said to be in counseling together, though today's news is that Elin may have purchased a home in Sweden on an island reachable only by ferry and gone there with the children.  If so, Tiger's situation may sadly mirror Governor Sanford's even more closely, i.e. resulting in the breakup of the family.  It seems pretty clear that Tiger's sexual relationships weren't conducted openly with Elin Woods's knowledge.  Still, wouldn't it be better if they had some sort of agreement that permitted connecting with others so long as trust isn't broken?  Trouble is that I doubt there's any wife who'd not be outraged by being subjected to the media frenzy surrounding this story and very concerned about protecting her children from prying eyes and hurtful comments.

It would seem that even the most talented, successful and wealthy among us share the same relationship challenges as we regular people.  When it comes to faith and trust in marital relationships, the playing field is even for all of us.  No one is exempt from having to be accountable for breaking relationship agreements.  A lot of pain and difficulty could be avoided if the Woodses, like Will and Jada Pinkett Smith, agreed that sexual flings were OK so long as commitment to the marriage is genuine and not undermined by intimacy with others.
Posted by Anita Wagner Illig at 3:53 PM 3 comments: