Polyamory - It's Not Just for Baby Boomers Anymore

In his most recent entry at Polyamory in the News, Alan quotes a college student: "Every time I turn around, I feel like more of my peers are entering open relationships." A 30-something family member of mine said the very same to me just a few days ago.  Then Alan gives us a rundown of the latest poly news from college campuses.  He also includes the following quote and comment:


"This is my poly dream: that every college student in America will know the word polyamory and what it means within five years." So declared Diana Adams at a Loving More conference 4¼ years ago. Since then, more progress has happened in this direction than I expected. As the poly universe grows, its average age is certainly trending down.

I, too, witnessed Diana's passionate declaration that day.  Are we approaching our cultural tipping point, or is it maybe not too far down the road?  Time will tell.  It's very exciting to think about that, it's what I've been committed to helping facilitate for a long time now, remarking from time to time that the completion of the societal legitimization of alternatives to traditional monogamy lies in the hands of younger generations.  It's exciting to see that TNGers continue to find their voices and to be able to be a witness to that myself.  More and more they are taking their power in hand and, in so doing, making a difference for all of us.
Posted by Anita Wagner Illig at 12:05 PM 5 comments:

This Week on Savage Love: Dan Gives Poly People the Last Word on Poly as Orientation

How lovely to see that Dan Savage was as good as his word when he remarked a week or so ago in the Slog Blog that he would be giving polyamorists a chance to have their say regarding a statement he made to Polyamorous PolyMath ("PP") (scroll down to the second letter), saying that polyamory is something you do and not who you are.  The question of whether polyamorous counts as a sexual orientation added to the ensuing confusion mele', but orientation indeed it is, though a relationship orientation.  It really doesn't fit as a sexual orientation, unless you count liking to have sex with more than one person at a time.  In that case, "That's not for me", said no one, ever.  (Thanks Jimmy Fallon!)

After his brief intro, Dan published five excellent letters from people who described themselves, their poly families and their poly lives so that it is quite clear that polyamory for many people is lightyears more than merely something that we do.  I think that makes Dan a classy guy.  As he notes, he walked into this one unawares and accidentally kicked the hornet's nest.  Dang those poly people can be a feisty bunch.


"What moving words in all of those letters. And pride. Those are excellent examples of the complexity that is identity to polyamorous people, and its further complicated for people who are LGBTQ *and* polyamorous and questioning it all. I know many polyamorists who cross multiple community lines, including sexual activities like BDSM and swinging, and spiritual practices like body modification, paganism, tantra, and liberal mainstream churches like the Unitarian Universalists and the UCC. It's a great joy to be free to find out who we are in that way, and to have that freedom to live a life that is authentic to who we are. But I know you know that. Thanks, Dan..."

To catch up with how this whole thing started and ended up getting focus at Savage Love in three successive weekly columns, check my preceeding blog posts first here, here and here .

Some of Dan's readers are getting impatient with the discussion, but it is very important to correct an impression Dan erroneously made (with no malice) that spread far and wide very quickly since Savage Love is a syndicated sex advice column.   Giving an audience that false information and it coming from someone as knowledgable and respected as Dan has the potential for biased perceptions of what polyamory is, who polyamorists are, and how we love.

On a vaguely related note, here's a quick little gem of an interview with Dan in which he gives great advice about how to be a good sex partner and the challenges of monogamy to MTV Voices interviewer (and well known sex educator) Francisco Ramirez (seen with Dan below - sorry you have to jump to the interview but the embed link MTV is providing is broken). 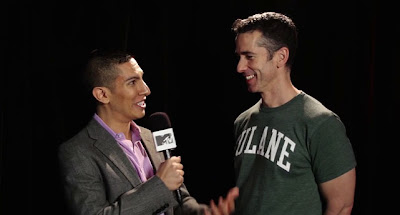