Alan over at the Polyamory in the News blog has put up a post that has attracted a lot of attention and comment about yesterday's piece on open marriage on the Dr. Phil Show.

Kenya and Carl are a couple who have been speaking out on their form of responsible nonmonogamy for some time now.  They were courageous to agree to go up against Dr. Phil, just as was author Jenny Block when she went up against Bill O'Reilly and into a few other similarly hostile situations.

It's a very personal decision to accept such invitations, yet by accepting them we spokespeople also take on a significant amount of responsibility to others like ourselves.  For several years Dr. Phil's producers repeatedly asked we poly community spokespeople to provide people to appear on the show, and we consistently declined.  Especially since the Newt Gingrich supposed request for an open marriage story broke a few weeks ago, we spokespeople have been delighted at the fair treatment we've been given by members of the media, but we are under no illusions about the likelihood of being treated with respect by Dr. Phil.  Evenso, it's the viewers in his audience who have open minds we would be trying to reach.  Based on what we know about Dr. Phil's interview style, there was and still remains plenty of reason for concern that not enough of our message would make it into the final cut to outweigh all the ways in which we would be made to look bad.

Alan, usually the poster guy for the mild-mannered, had what is for him an uncharacteristically strong but evenso understandable reaction to Carl's statements that appeared to justify dispensing with practicing safer sex, and I share Alan's frustration.  We spokespeople can't afford the luxury of making highly controversial statements on subjects such as STI prevention, especially on national television, and give the impression that we - and by implication, those like us - are being irresponsible.  I've seen one or two other leaders do this sort of thing under the notion that they must speak their truth no matter what.  In my personal opinion, such defiance ignores the potential for harm that comes along with it and pretty much disqualifies us as effective leaders and spokespeople.  I'm not saying I think this is absolutely true in Carl's case, not if he learns from the experience.

As spokespeople, honesty is important to doing an effective job, but avoiding needlessly creating negative impressions is even more important considering the responsibility we take on when we speak to large audiences. Isn't the point that we want our words to clear up misunderstandings and have a positive impact? Why would we choose to make statements that would undermine that goal? It's terribly counterproductive to let this happen when in fact what we have to share is a message of just how ethical and healthy responsible nonmonogamy can actually be. We do neither ourselves nor our communities any service by playing into the hands of our critics.  Our words can have far-reaching consequences and affect the lives of thousands of people we don't even know. This responsibility MUST be taken seriously if we are to make the world a better, safer place for healthy families that don't fit the traditional model.

I already know that I share many of Kenya and Carl's values, and I am grateful for their courage and especially for their lending a voice to this subject from the perspective of people of color. I applaud their commitment to self-determination and the example they set for others to create the family life and responsible relationships that best meet their needs.

Author Pamela Haag refers in her recent book "Marriage Confidential," to those of us living a consenting and openly nonmonogamous life as renegade couples blazing a trail for others to follow. This is no more true for anyone than it is for we spokespeople who stick out our necks into the line of fire to raise awareness and counter misconceptions. We are all learning as we go, and we are all in this together.  I'm pretty sure many polyamory spokespeople, including myself, would be happy to collaborate with Carl and Kenya in this regard and learn from each others' experiences.
Posted by Anita Wagner Illig at 4:35 PM 4 comments:

Polyamory on the 11:00 News on DC ABC affiliate WJLA

My husband, Tim, and I had the privilege of being interviewed about our polyamorous open marriage recently, and it was shown on Washington, D.C.'s ABC news affiliate WJLA on the 11PM news on Thursday, February 9, 2012.  Also included are local polyamorists Sarah Taub, Michael Rios, and Jonica Hunter, none of whom are married to each other and who live together in what polyamorists refer to as  "V" relationship.  Their contribution was highly valuable in that together we were all able to give a couple of different yet common examples of how people arrange their nonmonogamous romantic lives.

A fairly brief article entitled Polyamorous Relationships: Managing Multiple Romantic Partners that is not a transcript of the video to go with it is also available, as well as a slideshow entitled The Faces of Polyamory of all of us who were in the video, including a few wedding and honeymoon pictures of Tim and me.

The story about Newt Gingrich's supposed desire for an open marriage broke about a month ago, and since then there has been a frenzy of media interest in we polyamorists that has not yet ended.  In fact, as ironic as it is, Newt's ex, Marianne Gingrich's contention that Newt asked her for an open marriage so he could continue to have a relationship with his mistress, Calista (now his wife) is responsible for we advocates finding ourselves with an opportunity to raise awareness unlike anything we could otherwise achieve on our own.

Yes, polyamory and open marriage are in the mainstream center stage spotlight, and there are a lot of us, including those involved with the Polyamory Media Association and Loving More Nonprofit, who are scrambling to meet all the requests.  If you have an interest in being interviewed either by a newspaper or appearing on a TV show, or any other sort of media event, please visit the PMA and educate yourself about best practices so as to be ready to shine on behalf of all who practice responsible non-monogamy.  Thanks!
Posted by Anita Wagner Illig at 11:53 AM No comments: 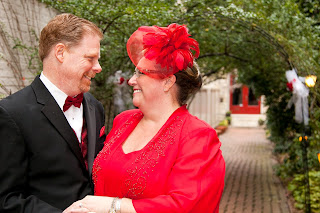 So where have I been since October?  If you've been wondering about that, I do appreciate your patience. I know when it comes to blogging, consistency is important, and I will do my best to return to that. It's just that there have been so many wonderful things going on in my life. I got married! (Nonmonogamously, of course.) We got engaged in early October and set the date for December 17, 2011, so as you can imagine, there was SO much to do! Here are my dear husband and partner of six years, Tim, and me on our happy day. We were married in Baltimore at beautiful Chase Court.

There have also been so many great things happening in the world of polyamory advocacy that I could probably (and likely will) write a book about it all.

I will do my best to update you in detail soon, but in the meantime, if you want to know what I'm reading, what's going on in my relationship life, and what's going on in terms of my polyamory advocacy and education life, check me out on Facebook.
Posted by Anita Wagner Illig at 5:07 PM 3 comments: 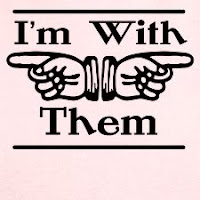 So a polyamorous friend sent me the following taken from her lovely poly life:

"You know you’re doing something unusual but very very well (albeit with maybe a bit too much technology) when you wake up with your mate, ease into your day together, and exchange iPads to share with each other the overnight love notes from your respective other partners."

Indeed!  Hope everyone has as great a Valentine's Day as my friend.
Posted by Anita Wagner Illig at 4:40 PM No comments: